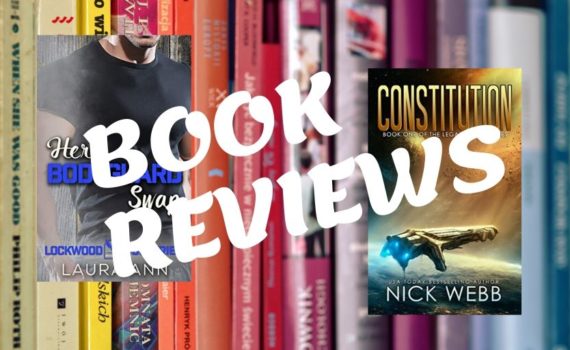 Romance book of the week: Her Bodyguard Swap by Laura Ann. I picked this one because she’s pretty popular in clean romance, and I haven’t ever read anything by her before.

Science Fiction book of the week: Constitution. I chose this one because this series is often lurking in the top 50 of Amazon’s many science fiction lists.

I really liked the premise of this one. Three brothers—triplets—all ex-military come together to start a security company. There are several other characters involved with the company, and I’m certain if you continued reading the series that you’d find romances for them all.

This story was cute and fun. The guy, Ridge, does one too many stupid things for my taste, but his poor decisions (all in the name of love) did drive the story forward. The girl is okay.

He’s admired her for a while, and her side of the romance is completely dependent on the spark that she feels the first time she sees him. I’m not a huge fan of love at first sight, so this felt flat to me.

The reveal of who the internet troll is was totally forced. Mysteries should have clues, not just whack you in the face at the end of the story.

That being said, this one is cute and clean and easy to read. I’d say four stars.

She’s falling in love with her bodyguard,
now if she could just figure out who he is!

Everly Madison loves life as an online music sensation. But it turns ugly when an internet troll posts threatening comments on her videos. When she hires a bodyguard to keep her safe, her hunky new protector makes her soul sing.

Ridge Lockwood gave up the military to help his two identical triplet brothers establish a security firm. But when one of their first clients is the online singer-songwriter he’s admired for months, Ridge is devastated when one of his brothers is assigned the case instead of himself. Determined to spend time with her, he takes matters into his own hands and pulls out the old, ‘switcheroo’.

As Everly becomes confused about exactly who she’s falling for, the predator’s actions begin to escalate. Can Ridge defend her while still hiding his secret? Or will he come clean, risking not only his company’s reputation, but the woman he’s fallen desperately in love with?

This book is a cross between Independence Day and the more recent Battlestar Galactica. It reads like a movie, relying on jumping from scene to scene and character to character to keep the reader engaged.

I like that style, and mostly enjoyed the book.

I was surprised how short it was. There is a trend in Indie publishing to keep books shorter so readers don’t get bored, and so the author can divide their story into more books, which will make them more money.

Neither of these things is bad, but the characters suffered in this story due to the short(ish) length. The character are mostly stereotypes with little to no character arcs. There was just enough to keep me interested.

All in all this one tells you about the action instead of letting you feel it through the characters. Not my style, but considering the book has over 3,000 positive reviews, it’s a style a lot of people like.

I’d give it four stars.

Without warning. Without mercy.

We were not prepared.

We nearly lost everything.

Then, the aliens abruptly left.

We rebuilt. We armed ourselves. We swore: never again.

But the aliens never came back.

There you go! Book reviews Week 3!

Tune in next week for more reviews.