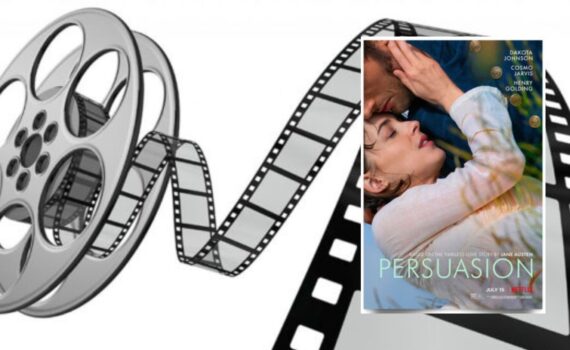 Eight years after Anne Elliot was persuaded not to marry a dashing man of humble origins, they meet again. Will she seize her second chance at true love?

I’m a Jane Austen fan, but have only read and seen Pride and Prejudice and Sense and Sensibility. When I saw this on Netflix I had two thoughts: first, I can watch it without having to read the book, and second, I can torture the hubby with a girlie movie! Both solid reasons for watching.

Remember that I haven’t read the book and I love snark. In my opinion the portrayal of Anne is brilliant. She’s strong, loves her family despite all of their short comings, and does her best to find happiness despite her circumstances. The fourth wall breaks are hilarious and helpful for the story. The one moment I didn’t appreciate was when she blurted out at dinner that her brother-in-law had preferred her first. That was weird and I’m not sure it helped the story at all.

Captain Wentworth was, for me, a bit flat. Not sure if he’s like that in the book, but I thought he was boring. Love struck and honorable, but dull.

I liked the rest of the cast.

Oh my goodness, yes. The snark and flighty tone kept me totally engaged and I wanted to know what would happen. Even the hubby was mildly interested, which is saying something.

I felt like a few things were rushed. Like the letter at the end and basically every scene with Mr. Elliot. I could have used more background on a few things, but I’m sure none of that is in the book. The fourth wall breaks helped me understand the plot.

Jane Austen is always a slow burn. I didn’t get bored, which is good.

Regency movies are always fun. This one did a good job entrenching me into the time period, which was great. I liked the diversity in the cast, even though it’s not “period appropriate.”

Because I wasn’t enthralled with Wentworth the end was a little flat. Also rushed. However, it was a satisfying HEA and I’m good with that.

Jane Austen purists hate this version. It portrays Anne as a bit of an alcoholic, but frankly with her family I can hardly blame her. I thought it was brilliant. I’ll probably watch it again. If I were to put my own spin on a classic Jane Austen tale, this is exactly how I’d do it!