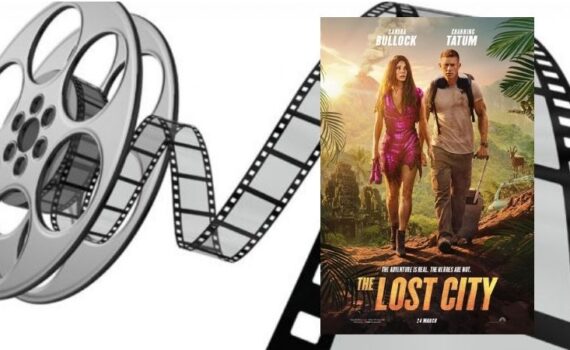 A reclusive romance novelist on a book tour with her cover model gets swept up in a kidnapping attempt that lands them both in a cutthroat jungle adventure.

This past week was more than a little challenging, not to mention emotional. We wanted something we could just laugh at. So we went to this movie. Plus, the trailers looked hilarious.

I enjoyed all of the characters in this film. Some of them were practically carboard cutouts, but because the actors did such a good job I didn’t mind. Daniel Radcliff owned his super villain persona loke a boss. The two main characters each had a nice emotional arc, and the whole thing wrapped up nicely.

Where I thought this film really shined was the chemistry among the cast. Everyone played well off of everyone else, leaving me laughing the entire time.

I was expecting cheesy romance and action. I got both. Nothing came as a great surprise, but I did enjoy watching. The hubby stayed awake 97% of the movie, so that’s enough to give it a 4 out of 5 by itself.

It’s a stupid action film about a lost treasure on an island that already has people on it. The whole thing is a plot hole. However, I brushed past the first thing that sort of threw me out of the story and decided I didn’t care. If you’re looking for historically accurate turn on the History Channel or something. If you want to be entertained, ignore the plot holes and keep watching.

The pacing in this film slowed down just enough to remind us of the internal conflicts of the characters, then we were off for some more fun. No yawning.

I’m going to focus on the comedy here. This movie is funny. A bit irreverent, if you’re sensitive about that, but the hubby and I laughed out loud a lot. We’ve already quoted a few lines from it to those who have seen it. I thought the humor was spot on. The filming was fun and the vistas beautiful.

No surprises, but I liked it.

Loved it. Maybe it came at a time when I needed to just laugh and it’s not as entertaining as I remember, but I’ll for sure watch it again.