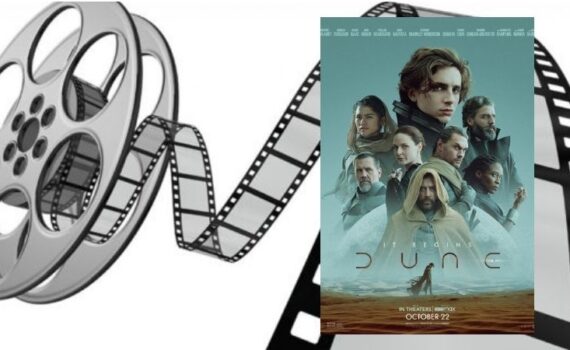 Feature adaptation of Frank Herbert’s science fiction novel, about the son of a noble family entrusted with the protection of the most valuable asset and most vital element in the galaxy.

My 8th grade English teacher found out I liked science fiction and suggested I read Dune. I remember loving it. I also enjoyed the 1980’s miniseries. Yes, I know it’s awful, but I dug it at the time. The previews to this film made it look epic, so of course I went to see it.

I think most of the actors nailed the characters. I especially loved the supporting cast. Oscar Issac, Jason Momoa, Josh Brolin, Sharon Duncan-Brewster, and Stellan Skarsgard were amazing!

I remembered Lady Jessica being more sure of herself. I didn’t love how she waffled between crying, looking tragic, and then actually doing something cool.

Timothee Chalamet did a good job as Paul, but I didn’t connect with him as the character. I’m going to have to watch it again.

It’s been ages since I read the book or watched any of the other adaptations, but it was amazing how quickly the plot came back to me. I knew what was going to happen and cared anyway.

I’m not sure I could call plot hole on anything in this movie. It followed the book pretty well, from what I remember. However, I did think the scenes were a bit whiplashy. More on that in a moment.

The pacing of this movie is so weird. Every scene has been carefully crafted, set, and acted. I can tell there was a whole lot of TLC poured into each one. However, the movie as a whole felt rushed.

I mentioned whiplash above. Moving from scene to scene felt like looking from one end of a football field all the way to the other, then back. My mind had to scramble to keep up as the story progressed. It felt as if the film lacked easy-to-follow transitions.

It’s hard to explain. As I said, I need to watch it again to figure out what my brain is trying to get at.

Um, the only way to describe this film is stunning. I’m totally willing to see it in the theater again because it was, well, beautiful.

I knew this was only the first half of the first book and they ended it in a good spot.

Almost everyone else is raving about this movie. Maybe that’s why for me it was good, but not the greatest thing I’ve ever seen. The pacing turned me off, which left me feeling unsatisfied at the end of the film.

Still, it was cool to watch.