Book Reviews: Attractive Nuisance and Under a Graveyard Sky 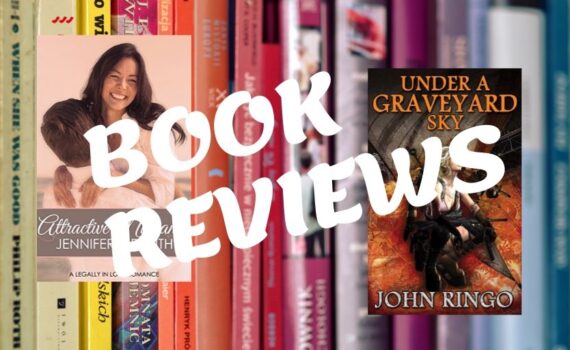 Book Reviews: Attractive Nuisance and Under a Graveyard Sky

Also the final week of this round of reviews.

Romance book of the week: Attractive Nuisance: A Courtroom Mystery Romance by Jennifer Griffiths. I’ve known Jennifer for a long time, but haven’t read any of her newer romances, so I thought I would!

Science Fiction book of the week: Under a Graveyard Sky by John Ringo. This one is post apocalyptic, which I haven’t been focusing on, but a friend recommended it, so I thought I would try it.

The book I read in week 1 was a cozy mystery. I like those. I didn’t love the courtroom + romance aspect of this book. It felt like too much for this particular story.

I see now that I should have picked another book in this series, because this one has the worst reviews, and the book kind of deserves it.

Before I say what I didn’t like about it, I do have to admit that this book is a clean romance with some good dialogue and it did make me chuckle a few times.

Now the other end of the stick. Camilla, our main girl, is a seasoned attorney…and gets completely tongue tied and messes up a closing statement because a good-looking man walks into the courtroom. Ugh. The guy is annoying in a stalker sort of way, (maybe he was supposed to be charming?) and waits until the last few chapters of the book to show Camilla who he is. She annoyed me. He needed to be smacked. I did not enjoy anything about their relationship…mostly because there wasn’t one.

If that wasn’t enough, Camilla’s entire “hang up” is that she’s too old to start a family, which he wants. The entire book I thought she was in her late 30s. I mean, how many seasoned attorneys are…get this…27?

27? If this book hadn’t been on my Kindle I probably would have thrown it across the room. The guy does the math for her, and suddenly she sees the light? “I won’t die before the kids are 20!” Nope and nope.

There were also some serious plot holes.

Two and a Half Stars.

Rival attorneys Zane and Camilla fight for the same job—and attraction to each other in this enemies to lovers romance.

Prosecutor Camilla Sweeten desperately needs the promotion to Chief Deputy to pay bills. She’s meticulously prepared for every case, and she’s been picking up all the pieces where the last chief deputy blanked out. She deserves this, and she’s working like crazy to prove it.

Except, she’s plagued by a dream she had where she was kissing a hot attorney in the basement of the courthouse. And in the middle of closing arguments in an important trial—she sees someone in the courtroom whose face matches the guy’s from her dream.

Camilla’s brain gets on Wonder Woman’s invisible jet and flies far, far away.

If that’s not enough to lose her the job, her boss has just hired a hot, hotshot attorney from another county—the son of his college frat buddy. Marvelous. Camilla’s chances at the promotion are shot.

Attorney Zane Holyoak is a swaggering prosecutor who’s earned the nickname The Jury Whisperer. Against logic, he has followed his gut back to Yucca County, after swearing never to return. If he can get the promotion to Chief Deputy, Zane can finally prove to his dad he’s not a disappointment.

However, one majorly attractive obstacle stands in Zane’s way: the uber-capable Camilla.

When they’re assigned to tag-team prosecute an impossible case, these opposites-attract rivals must follow their heads and their hearts to uncover the truth.

Can they put aside their differences and also find love?

Under a Graveyard Sky

If a friend of mine hadn’t recommended this book, I never would have listened to it. The cover is somewhat awful, in my opinion, and doesn’t tell much about the story. The blurb doesn’t catch my attention either, but when someone says they’ve listened to a book multiple times, that gets my attention.

I listen to books while I walk in the mornings, and this book had me stretching for thirty minutes instead of ten after said walk.

The style is a bit strange. It’s almost like a movie—jumping from one thing and person to another, but I was rarely confused, and honestly the pacing kept me interested.

I admit, as a reader you have to suspend some disbelief when the 13 year old is too stupid for words. More than once. However, I went into this for an entertaining zombie apocalypse story, and I got it.

The story shifts tones when the Smith family decides instead of finding an island to live on, they want to rescue the survivors on the ocean around them. I loved this decision, and will likely read the next book. Which doesn’t happen very often.

(I’d give it five, but the two daughters are a bit unbelievable…but I still liked them!)

Zombies are real. And we made them. Are you prepared for the zombie apocalypse? The Smith family is, with the help of a few marines.

When an airborne “zombie” plague is released, bringing civilization to a grinding halt, the Smith family, Steven, Stacey, Sophia and Faith, take to the Atlantic to avoid the chaos. The plan is to find a safe haven from the anarchy of infected humanity. What they discover, instead, is a sea composed of the tears of survivors and a passion for bringing hope.

For it is up to the Smiths and a small band of Marines to somehow create the refuge that survivors seek in a world of darkness and terror. Now with every continent a holocaust and every ship an abattoir, life is lived under a graveyard sky.

That concludes Book Reviews Week 9!
I can’t believe I read or listened to 18 books in the last two months!

Book Reviews will now go to every-other week, unless I get really excited about something.