Book Reviews: Abi and the Boy Next Door and Binti 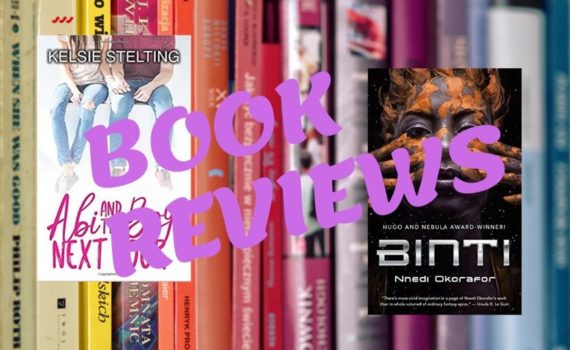 Book Reviews: Abi and the Boy Next Door and Binti

Guys, I can’t believe I’ve read twelve book in the last month and a half. It’s seriously been invigorating. I’ll keep reading and putting up reviews through June. By then you guys might be bored of the reviews. 🙂 I try not to bore people.

Romance book of the week: Abi and the Boy Next Door by Kelsie Stelting. This is another YA romance that I’d downloaded a while ago, and thought I would give it a try.

Science Fiction book of the week: Binti by Nneid Okorafor. No, I don’t even try to pronounce the author’s name, I’m certain I would slaughter it. I’ve seen this cover all over the place, and the ebook was on sale, so I picked it up.

Abi and the Boy Next Door

All in all this book was a fun read. I have some personal, nit-picky issues with it, but I’ll start out by saying the story is solid.

I didn’t realize this is the first of three books about this couple, which is a bit out of the norm. I probably won’t read either of the others, but if you’re looking for a YA romance series, this one might be for you.

Okay, now for my nit-picking. Abi, the point of view character and our heroine, has moved in with her grandma because her parents are abusive drug addicts and Abi finally got them thrown in jail. She’s broken. She’s also overweight. Both hard things.

The author tries very hard to give Abi a good character arc, but the only thing she does to change is eat right and exercise. Oh, and pine for the boy next door. That’s it. She’s kind of bland to her new friends. It’s the other people in the story that tell her how special she is. I’m not sure she ever sees it, and that was annoying. I like to feel that moment of release when the character understands who she really is. I didn’t feel it.

The love interest is the boy-next-door who is, well, practically perfect in every way. He’s so painfully perfect that even with a forced character arc, he’s very nice and very flat.

My other beef is that the author decided to use a size 3 model on the cover. Yes, Abi loses a lot of weight in the book, but as a chubby girl myself, it rubbed me the wrong way that they wouldn’t represent this girl properly.

It’s the first day at my new school and I already have a wide load sticker on my back.

But this is still better than life was before. Before I was taken away from my parents. Before I moved in with my grandma.

Before I met Jon Scoller.

He’s cute, he lives down the street, but the guy asks way too many questions. Questions about a past I’d rather forget.

And I am not his type. He needs to be with a cheerleader. A perfect girl. Someone who doesn’t look like the before picture for a weight loss shake.

Jon makes me feel like I’m more than a number on the scale, but I’m starting to wonder: does he feel the same way or does he just feel sorry for me?

This is a novella, not a full-length novel. Since there isn’t much in the way of YA sci-fi that isn’t dystopian, I thought I would check it out.

This book won some fancy awards, which I don’t usually put any credence in these days, but I have to admit this was a very different, very cool book.

The world the author creates is interesting, to say the least. There wasn’t a lot of explanation—no time in a novella—but there was enough to keep me grounded in what was going on.

I had to laugh at this review quote from an award-winning film director: “Binti is a supreme read about a sexy, edgy Afropolitan in space!”

Sexy? Uh, no. The girl was terrified most of the time (rightfully so) and was afraid to talk to the one boy she liked. She was a weak character that forced herself to become strong, but she was still scared.

Edgy? Uh, not really. No idea what this guy is talking about. The world is interesting. The aliens are everywhere and some are scary. The main character leaves her family and her life to fulfill her dream. What’s edgy about that?

Afropolitan. Not going to lie, I had to look that up to make sure I was right about the definition. This is true. She was from Africa and wanted to stay connected to her home and people. The story takes place far in the future, so it’s not Africa as we know it, but still fun.

The scant length of the story made it feel like the author had cut a lot out to shove it into a word count, which makes me sad. It could have made a great novel as well.

Her name is Binti, and she is the first of the Himba people ever to be offered a place at Oomza University, the finest institution of higher learning in the galaxy. But to accept the offer will mean giving up her place in her family to travel between the stars among strangers who do not share her ways or respect her customs.

Knowledge comes at a cost, one that Binti is willing to pay, but her journey will not be easy. The world she seeks to enter has long warred with the Meduse, an alien race that has become the stuff of nightmares. Oomza University has wronged the Meduse, and Binti’s stellar travel will bring her within their deadly reach.

If Binti hopes to survive the legacy of a war not of her making, she will need both the gifts of her people and the wisdom enshrined within the University, itself — but first she has to make it there, alive.