Book Reviews: A Marriage of Anything But Convenience and War INC 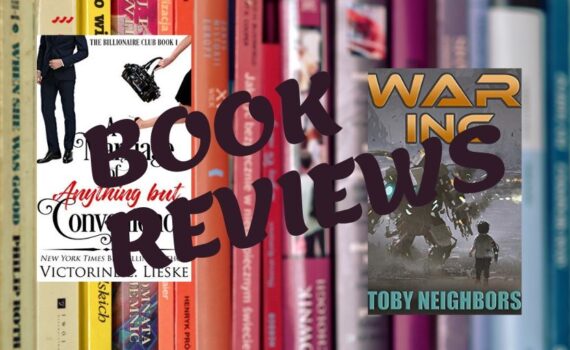 Book Reviews: A Marriage of Anything But Convenience and War INC

Romance book of the week: A Marriage of Anything But Convenience by Victorine E. Lieske. I’m trying to put more of a romantic comedy spin on some of my own romance books, and since this one was actually clean, I thought I would check it out.

Science Fiction book of the week: War INC by Toby Neighbors. Once again I was looking for a fun story with mechs in it, which is what this one promised.

A Marriage of Anything But Convenience

I didn’t love the premise of this book. It felt thinner than most romance books, and the girl is so annoying for the first half of the book that I almost stopped reading. However, the end was well thought out and redeemed it a bit.

Our hero Derek, is just about as nice and love-struck as they come. If not for him, Nara’s insistence for being annoying and whiny would have made me hate her through the first half of the book.

I also expected more humor. I did find it in the romantic comedy section, after all. I only chuckled out loud a few times, but others might like it more.

This is a mid-line book for me. Not stellar, but not terrible. A fun read, if you’re looking for an easy escape.

Three and a half stars.

It was a simple marriage of convenience. Just two years. What could possibly go wrong?

All Nara wanted was to become a fashion designer. That, and an IV full of Diet Coke to feed her favorite addiction. She never thought her father would force her into a marriage of convenience. And who did he choose for her wedded bliss? None other than Derek Marshall, Mr. Stuffy himself.

Derek’s been in love with Nara since they were kids, but he’s always become so tongue-tied around her. He wasn’t like the guys she dated, smooth and confident. No, he was too awkward and nervous. So, when Nara’s father decided it was best if they marry, he readily agreed.

Maybe being forced together for two years would make her see him differently.

I’ve never read anything by this author before, but he has a lot of fans who love his books.

I wanted to like this book, but the character voices were flat and bland. The entire first section reads more like a bullet point of things that happened to someone else rather than the character on the page, and the rest of the writing is only marginally better.

The whole book felt rushed—skipping over most of the character building moments to go into exposition on some facet of the story that while interesting, didn’t carry it for me.

This book felt more like a prequel and set up than it did an actual novel. The background plot of the company is somewhat interesting, and the battle mechs are almost interesting. I guessed the big surprise at the end, which isn’t a problem if it’s well told, which it wasn’t.

Considering the flat characters and shallow writing, I didn’t love it. It’s readable, but not if you’re looking for actual story. The author claims that this series is suitable for all ages, and he’s right about that. It lacks the swearing, gory violence, and sex of a lot of other sci-fi series. So there’s that.

When Alex sees a Defender Class battle mech shot down just meters from where he’s hiding, he knows he has to do something.

Getting into a mechanized battle suit isn’t easy, and controlling the powerful war machine shouldn’t be possible without Ahzco’s secret Implanted Neural Control (INC) chip, but Alex is about to do something no one on a hundred worlds has ever done.  And his life is never going to be the same.

Join Alex Evans as he gets fast-tracked into Ahzco’s Corporate Defense Force and the world of mechanized warfare.  There are secrets that people will kill to keep, and dangers that can’t be avoided.  The company opens the entire galaxy to a young man from a colony planet, but Alex must determine if he can trust that Ahzco has his best interests in mind.  Or if he’s just another pawn in their corporate games.

Tune in next Wednesday for my last week of reviews!

After that I’ll go to every other week. Probably.