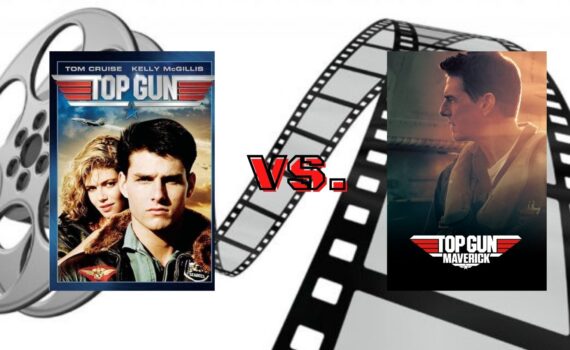 Top Gun: As students at the United States Navy’s elite fighter weapons school compete to be best in the class, one daring young pilot learns a few things from a civilian instructor that are not taught in the classroom.

Top Gun: Maverick: After more than thirty years of service as one of the Navy’s top aviators, Pete Mitchell is where he belongs, pushing the envelope as a courageous test pilot and dodging the advancement in rank that would ground him.

Top Gun: I decided to rewatch the original a few weeks before Maverick came out. I loved this show in the 80s and wanted to see if it was as good as I remembered.

Top Gun: Maverick: As I said, I loved the original as a kid. However, after the eye-rolling attempt at Independence Day 2 I was skeptical. Would they ruin the franchise? I needed to find out.

Top Gun: The acting was a little…flat. I’m not sure why that struck me, but it did. The characters themselves were a good mix of tropes and depth. Even though Ice Man (and many of the other pilots) is practically one dimensional, the character has been perfectly cast. What else are you going to get with a slew of the best pilots in the navy? Ego. Maverick has more depth, with the conflicts of his father’s disappearance and Goose dying he goes through the ringer.

Top Gun: Maverick: Once again we’re back at Top Gun and swimming in the lake of egos that are the pilots. Even Maverick, who seems to have found some empathy for those around him, still has enough confidence to take on the youngsters. I honestly didn’t mind him in this film. The younger pilots were practically interchangeable—except for Hangman who is the new Ice Man—but they were mostly likable. Hard workers. They showed some emotions. I felt like they held Roster’s emotions in check a little too much, but maybe that’s me.

Ice Man…amazing. Loved every second of him on the screen and the relationship he and Maverick had built over the years.

Top Gun: Duh. This came out near the end of the Cold War, but we didn’t know that at the time, so everything about this movie in 1986 kept me glued to my chair. That tension no longer surrounds our country, and the film could have done a better job of showing that. (hindsight here)

As for Maverik in this film, I always cared what happened.

Top Gun: Maverick: I liked how they set out a (mostly) plausible mission and made it almost impossible. The pilots had to work for their shot at the mission while at the same time keeping their cool. Maverick states he isn’t a teacher, and at first he’s right. However, get that guy in a plan and let him show others what’s possible and he’s a great teacher. More, he’s a better leader. I was totally invested in the mission, in what happened between Maverick and Rooster, and even the romance subplot.

Top Gun: I honestly can’t think of any. Maybe I’m blinded by early teenage nostalgia, but even on the rewatch nothing yanked me out of the story.

Top Gun: Maverick: Two things tossed me out of the story during this film. First, the choice of the last pilot (avoiding spoilers here) had no basis. At least in the first one they knew Maverick was one of the best if not the best pilot in the program. Even if he was having issues engaging in combat they knew he could do it. The final pick in this movie…while it had to be done for the plot they never gave me a good enough reason to pick him. A single line of dialogue would have done it, but if it was there I missed it.

Second, (spoiler) when the helicopter is about to blow Maverick to pieces I was like, “Wouldn’t they want to question him, not kill him?”

Top Gun: The romance parts in the first movie are, in my opinion, slow. That could be my early teenage not-caring-about-boys-yet stage talking from the 80s. As a writer I know they use those scenes to slow the story and let the audience reset, so I get them, I just find it dull. Not super believable either.

Other than that, the story moves.

Top Gun: Maverick: For whatever reason I found the romance in this story way more likely than the original. Maybe because Maverick feels like much more than his pilot’s wings and he’s looking for something deeper than a fling. Once again these are the slow parts of the story, but I liked this better than the original. Everything kept me engaged.

Top Gun: Dogfights probably suck in real life, but they’re super cool on screen. I loved the flying. Of course the Americans beat the bad guys, so that’s always a win during the Cold War. I also liked learning about the Top Gun school. Very cool.

Top Gun: Maverick: I’ve heard that the actors did a lot of their own stunts. Not flying the planes but really being in them and pulling the gs. That’s crazy! The training sequence was super fun, and I loved seeing the technological advancements between the two films. On the cool scale I give it full marks.

Top Gun: I found the ending to this one more satisfying than the new one, and I’m not sure why. Again, it could be nostalgia. Or the cold war. Or maybe it’s the fact that Maverick had to overcome his issues to win.

Top Gun: Maverick: While I loved the end of this film, it wasn’t quite as satisfying as the original. I wasn’t entirely sure who I should be cheering for, Maverick or Rooster. Or both? The fact that Maverick got to shepherd Goose’s son through the experience was cool.

Top Gun: I’ll always enjoy this movie, but as I said the acting itself is flat. Or maybe it’s the tone of the film. Something didn’t jive with me like it had way back when.

Top Gun: Maverick: Maybe I needed a feel-good movie, but I thoroughly enjoyed this film. I left the theater talking about it and will tell anyone who’s interested to go see it. Overall, I liked it more than the original.