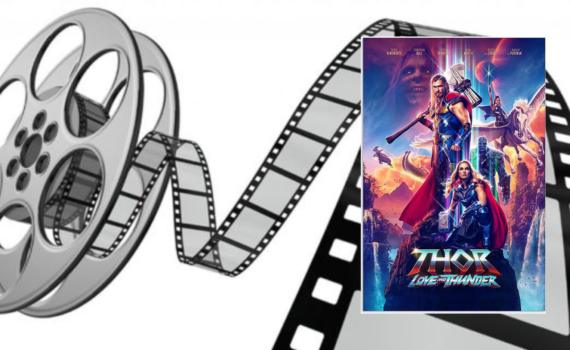 Thor enlists the help of Valkyrie, Korg and ex-girlfriend Jane Foster to fight Gorr the God Butcher, who intends to make the gods extinct.

Chris Hemsworth. And it looked funny.

Also, I needed a break. Life has thrown a couple of curve balls at us since the beginning of the year, and I wanted a little escape. So I went into this looking for silly humor and a lot of punching things.

Most of these characters are old friends, so they were pretty solid. Jane felt a little forced with the ultra silliness, but when you’re in that situation who knows how you’d act, right?

I thought Christian Bale did a great job as the bad guy. They gave him just enough back story that he didn’t seem ridiculous. Although I’m not sure I was totally on board with his final decision.

Yes. I know most people don’t put much merit in Marvel movies, but Thor has lost a whole lot throughout the films, and I have a soft spot for the guy. And it’s not because he’s both super hot and funny. His character has gone through the ringer multiple times, and I’m always routing for him.

Although the other gods didn’t do much for me. There could have been more killing there. Just saying.

It’s a superhero movie, so there are of course plot holes. You always have to suspend several layers of disbelief, but they did a decent job of covering the big issues. I don’t remember anything throwing me out of the story, so that’s probably good.

None. The hubby drifted off a few times, but that’s normal.

This film felt extra CGI heavy, which I didn’t love.  Other than that, I enjoyed it.

As I said above, I’m not sure I bought the bad guy’s final decision. Other than that, nothing surprised me.

I went in expecting to laugh and be entertained. I totally got that. I’d watch the film again, but couldn’t say I liked it more than Ragnarok.