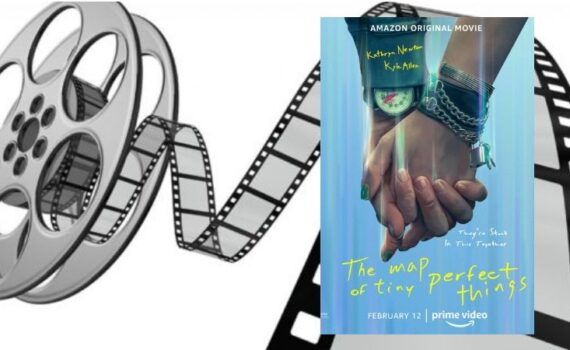 Quick-witted teen Mark is contentedly living the same day in an endless loop when his world is turned upside-down by the mysterious Margaret, also stuck in the same loop. What follows is a love story with a fantastical twist, as the two struggle to figure out how – and whether – to escape their never-ending day.

Not going to lie, we watched this on Valentine’s Day weekend. I sort of picked it to torture the hubby, but also because it looked intriguing.

Remember, this is a young adult romance, so the characters have teenage problems with teenage attitudes.

Mark is a typical self-absorbed young man who’s been living his own Groundhog’s Day and hasn’t quite reached the point where Bill Murray decided to help other people because it’s the right thing to do. I quite liked Mark. He grew, figured a few things out, and is funny.

Margaret is living in the same Groundhog’s Day loop, and seems reluctant to let Mark into her life, despite the fact that they have forever together. I guessed her story from the beginning, but still felt all the emotions when we finally got to see the truth.

All in all, I thought the characters were good.

Yes. At the very beginning I wasn’t sure if I liked Mark or not, but that settled pretty fast. I liked Margaret because Mark liked her. I was invested in what happened to them.

Of course there are some plot holes, this story is essentially about time travel. That being said, I didn’t dwell on any of them.

I loved that they straight-up compared their circumstances with Groundhog’s Day and The Edge of Tomorrow. Totally making fun of their own trope.

As I said above, I guessed the end near the beginning, but that’s not unusual for me. The writers did such a great job with the story that I still get choked up when Mark had his revelation and we saw Margaret’s real issues.

Once or twice. Nothing serious.

Normally a movie like this wouldn’t have much of a cool factor, but the twist at the end was pretty cool. The writers did a really good job tying things together, tugging on heart strings, and keeping me invested.

Loved it. Anything more = spoilers.

Good movie. A bit of teen angst, a bit more language than I like (although it was still wasn’t bad), and a interesting twist.