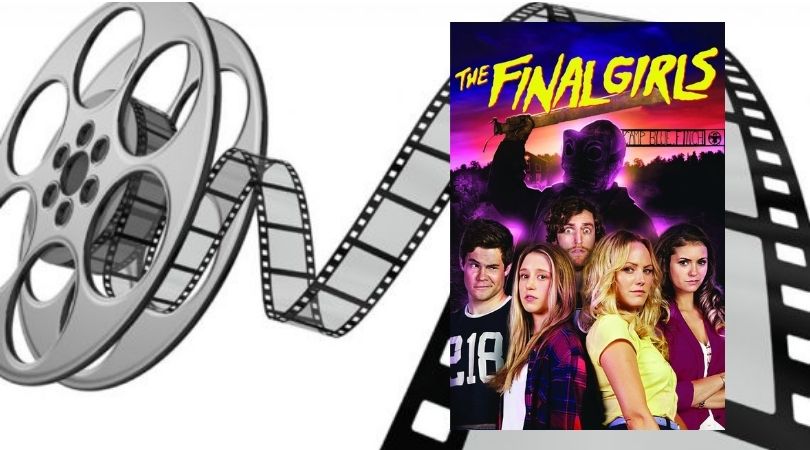 A young woman grieving the loss of her mother, a famous scream queen from the 1980s, finds herself pulled into the world of her mom’s most famous movie. Reunited, the women must fight off the film’s maniacal killer.

The hubby and I found this gem while searching through lists of the best scary movies that aren’t rated R. (For those of you who don’t know, I don’t watch many R-rated movies.) The premise of this one made us laugh, so we watched it. We were expecting campiness and cheese. We got both.

The main character was too flat for me. For most of the movie she simply looked tragic, which made the end unbelievable.

All of the character arcs were, to be subtle, predictable. Nothing came as a surprise. I did like how the mean girl from the real world figured out she was the mean girl. That was fun. And the girl who only wanted to take her clothes off made me laugh. That’s what you get when you’re not a real character, but a fake character from a movie in a movie. You have to watch it to get it.

Somewhat. Frankly I was there to see how this movie mocked the 80s slasher movies. The main plot was, as I said about the characters, predictable.

Five people walk through a hole in a movie screen into another movie that they sort of have to play through to get home…there were plenty of plot holes, but honestly, it was pretty clever, so I didn’t mind so much.

Whenever the main character was looking tragic. Other than that, it kept my attention as much as any ‘okay’ movie does.

I’m going to rename this the Haha-Factor. Did they nail the horrible writing, dialogue, and characters from an 80s slasher flick? Yes. Did I laugh when people died? Yes. I think they did a great job keeping this purposely campy which made the movie fun.

In general, yes, I liked the end.

The very end didn’t come as a surprise, but I enjoyed it anyway.

To make this movie unique, they should have tried talking to the psycho killer, instead of just failing to kill him again and again.

The “Final Girls” thing was a little heavy handed.

It was fun. Would I watch it again? Probably not. But I would recommend it to anyone who likes satire and slasher movies.