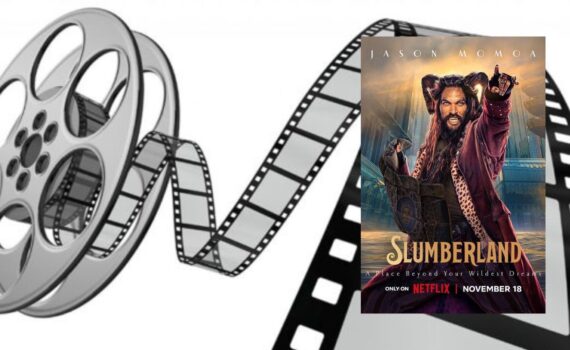 A young girl discovers a secret map to the dreamworld of Slumberland, and with the help of an eccentric outlaw, she traverses dreams and flees nightmares, with the hope that she will be able to see her late father again.

The hubby and I put this on our watch list a few weeks ago. Since we we’re both down with the flu we decided to put it on with the expectation that we could turn it off if it was terrible.

The characters were…fine. The girl who played Nemo did an excellent job. Jason Momoa only had so much to work with and did a decent job.

In general I’d say the character suffered from being a little flat. Which seems strange to say considering Flip is supposed to be this wild and crazy dream world guy. The girl, Nemo, stole the show.

It didn’t take me long to figure out how the entire movie was going to play out, so I kind of cared what happened, but I’d already guessed it. Sometimes that isn’t a problem, because the journey the film takes you on is awesome. This one was more like…okay.

I’m still not sure how the kids got into the dreamland to begin with, so that was confusing. Also, if her uncle was trapped in dreamland (spoiler) then how was he in the normal world? I had many questions that remained unanswered.

If anything this movie suffered from whiplash. I didn’t get a chance to yawn, because I was being yanked all over the place.

One thing this film got right was the cinematography. It was beautiful.

I guessed it well beforehand, but it was still good. Like I said, Nemo stole the show.

This is billed as a kid’s film, but it’s not, which is where I think it fell a little flat. The writers weren’t sure which audience they should focus on and the show suffers because of it. I’m not sad we took the time to watch it, but I wouldn’t watch it again.