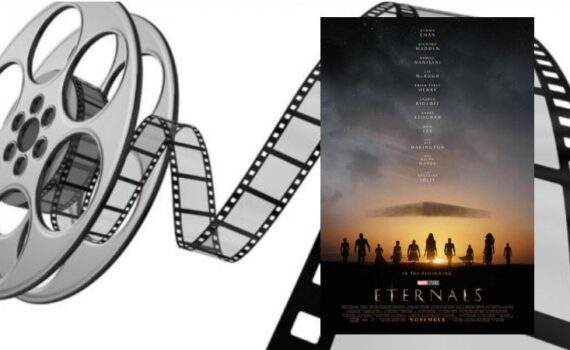 The saga of the Eternals, a race of immortal beings who lived on Earth and shaped its history and civilizations.

It’s Marvel, and so many people had differing opinions on it that I decided to check it out for myself.

There are a LOT of characters in this movie. Probably too many, but they did a decent job fleshing them out enough so I remembered each one. Mostly. One girl got lost for a while.

I found Angelina Jolie’s conflict very interesting.  Some of the others were great, others were flat. The story probably resonated with a lot of people because of the array of characters and their conflicts.

Yes. I wasn’t on the edge of my seat, but I did want to know what happened. Unlike most Marvel movies, this isn’t super action-packed. Instead it’s a family drama that boarders on a Greek Tragedy.

Well…it’s a Marvel movie, so there are plenty of plot holes.

This is probably going to get me yelled at, but here we go…I have to say that having a deaf character was really cool. However, when you get into who/what the Eternals really are, why would she be deaf? It literally makes no sense. Actors did great. I’m happy they cast a deaf actress and I hope this paves the way for even more people in Hollywood. Hopefully the writers can weave it into the story in a more believable way.

I didn’t really like the main love story. The characters didn’t have chemistry, which made some parts of the plot unbelievable.

None. The time jumps were jarring, but I got the hang of it after a bit. The movie is long, but didn’t feel like it. Maybe if I’d gone in expecting more action I’d have something else to say here, but I’d heard it was slower than other Marvel movies, so I didn’t mind.

I LOVED the array of conflicts in the show, from each character’s introspection to the “big bad” and the question of what they should actually do about it.

Good visuals. Sweeping cinematography. A little heavy on CGI in a few places and it showed.

I liked how the conflict ended. And kudos to the writers because I didn’t see some of it coming even though the clues were there.

The very end, which is (spoilers) a cliff hanger, is a little annoying.

In general I liked the movie. I may not watch it again and again like I do most of the other Marvel movies, but I really did enjoy the main conflict and some of the character’s issues with the world and one another. If you’re a fan of action, curb your expectations. If you like family drama, this one is for you.