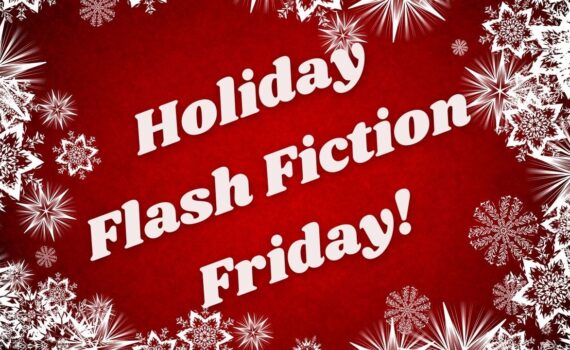 Today marks the first installment of my Holiday Flash Fiction!

This one isn’t as…light as you might imagine. I blame Kim, who put Krampus’ Switch on the list, as well as the hubby, who came up with the fruitcake idea.

Never Give Up, Never Surrender

Today’s Flash Fiction Friday is brought to you by:
Christmas stockings made by grandma
Krampus’ Switch
and
Fruitcake

“Did you get it?” Gunner asked.

I nodded and pulled the hunk of sticky fruitcake from my beneath my coat. I immediately pulled my coat closed against the frigid wind.

“What about you?” Gunner asked Britta.

Britta unfurled a knitted stocking in white, green, and red. I repressed a groan. She was supposed to bring something sacred.

“We’re trying to kill Krampus. How are Christmas stockings supposed to help?”

Britta opened her mouth to answer, but Gunner walked to her and put a hand on her shoulder. I flinched. I knew he liked her. I also knew that I liked her.

She glared, the freckles on her forehead scrunching together. “My grandmother made these. With love. She loved me. Krampus can’t abide love.”

Gunner reached out and tore the fruitcake from my hand and waggled it at her. “Krampus can’t abide fruitcake.”

“You don’t know that,” she spat back.

I raised a hand, wincing at the squelching sound that accompanied me separating my fingers. I should have wrapped the stupid fruitcake in a towel. “We don’t have time to argue.” To accentuate my point, a single dong came from the clock tower in town square, indicating only thirty minutes to midnight.

Gunner nodded his blond head, as if he’d been the one to notice. “Come one.”

Britta shot me a glare, and I gave her a smile. Her expression did not soften. A little thrill ran through me when she walked next to me instead of Gunner as he led us to the blacksmith shop. “This isn’t going to work,” she muttered.

For a moment my breath caught in my throat. She’d bumped my shoulder with hers. I had to swallow before I could talk. “What choice do we have after what we did?”

Britta’s eyes swiveled to the ground. “I know.”

Our feet crunched in the snow. Our breath made dense clouds as we walked. The wind brought the smell of fires from homes, and the horse stables nearby.

The three of us had spent the better part of four months trying to find Krampus’ weakness. Children had been taken from our village before, and some of them had tried to fight back, but no one had won. However, one old man—who now ranted and raved all day in the town square begging for money—claimed he’d gotten away from Krampus.

I thought back to the smell of the alehouse and the man’s sour breath as we’d bought him a drink so he would tell us the story.

He’d pushed his sister down during a disagreement when they had been little. She’d broken her arm. It had never gotten better, and had died a few years later.

The first Christmas after the incident Krampus had come to collect the man.

I didn’t know if I really believed in Krampus, especially after the man’s description of a demon with the legs of a deer, the body of a man, and horns like a ram, but I knew if Krampus was real,  he would be coming for us.

He came for all naughty children. Especially those who were unkind to others.

As we had been.

“Come on.” Gunner waved us around the back of the blacksmith shop where he’d started apprenticing in the summer. He’d left the back door ajar, and we slipped into the coal-black building. It somehow felt colder.

Britta stepped closer to me and reached for my hand. I almost jumped out of my skin. I did jump away from her, then cursed myself for doing so. Before I could move back, a spark flew from Gunner’s flint to a torch. A moment later orange light reached from the torch, touching the edges of Britta’s fair hair, and my gray coat.

“Let’s go over the plan,” Gunner said as he dragged a tall, roughly man-shaped, sculpture made of old wood, rusted metal, and scraps of cloth into the center of the dirt floor. It even held a birch switch in a clawed hand.

Britta rolled her eyes. “We each take some fruitcake.” She said it with disdain. “And whomever he grabs first, the rest of us try to get the fruitcake into his mouth.”

The old man from the square had said that he’d ridden in Krampus’ bag with other crying children for hours. Then, Krampus had dropped them. He’d been closest to the top, so he’d pulled the drawstring and scrambled out. Krampus had been on the floor, gagging. The old man had run for the door, and just before he got there Krampus had coughed up a piece of fruitcake. The old man had run into the night and not looked back.

I figured anyone could choke on fruitcake. It didn’t make it his weakness.

“Good,” Gunner said. Then he walked to Britta and tore the stockings from her hand. “Then we tie these around his mouth so he can’t spit it out.”

“No!” Britta reached for the stockings.

Gunner kept them away from her with his long arms. “You said they were sacred. They should burn his skin.”

Tears pricked at Britta’s eyes. She squeezed them shut and shook her head, but said nothing.

Gunner handed me one of the stockings. “Jakob?”

I took the stocking, imagining the warmth on it was still from Britta’s skin, and gave her a reassuring smile.

I couldn’t blame her. She’d started teasing Greta in the first place, so she got to be the bait.

That’s what Gunner had said.

I scrunched the stocking up in my fist and looked at the representation of Krampus. “Let’s go over it,” I said.

Gunner nodded. “Britta, you stand there.”

She got into place. I could see her trembling.

“We’ll be hiding,” Gunner said as he and I got into our places. “Remember, don’t scream. Just cry.”

Britta wiped a tear from her cheek.

“Are you going to chicken out?” Gunner asked.

Holiday Flash Fiction Categories!
We’ll only use 7 or 8 of each.