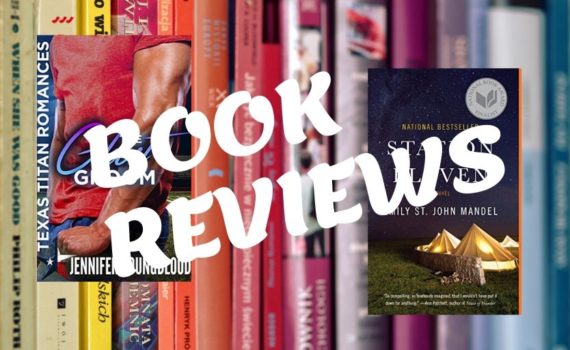 Romance book of the week: The Ghost Groom by Jennifer Youngblood. My Karly Stratford readers generally like Jennifer’s books, so I thought I would try one out! I actually picked up one of her box sets a few weeks ago for like 99 cents, and the hubby said I should read this one because he liked the title best.

Science Fiction book of the week: Station Eleven by Emily St. John Mandel. This one popped up on my audible feed, and because I love post-apocalyptic stories, I picked it up.

To be totally honest, I flew through this book, and not just because it’s a short read. The characters grabbed me and wouldn’t let go. Kudos to the author for that.

The plot, while fun, was fairly predictable (I’m talking about the unromantic bits). However, I did like both reasons for Rennen’s nickname being The Ghost. His plight due to his past was interesting and engaging. I called the end halfway through the book, but still enjoyed reading it.

A tough football player, a devoted sister, and the most difficult choice of all …

After a long, painful search that involved legions of duds, Ariana Sanchez, fitness guru and gym owner, finally meets the perfect guy when she least expects it. Not only can Rennen tear up the dance floor, but he has these adorable blonde curls and compelling green eyes, specked with gold. When Ariana’s around him she feels oh, so alive! And the best part is that he’s a perfect gentleman and easy to talk to. Their first encounter leaves Ariana floating on air, thinking there’s hope for her love life after all … until she learns that Rennen is the celebrated rookie who’s taking her brother’s position as starting running back for the Titans. Too bad she’s totally loyal to her brother and has to hate him now!

Rennen Bradley, the Ghost, has worked long and hard to get the opportunity to shine as the starting running back. Sure, he feels bad that Ace Sanchez was injured and that he’s taking his place on the team, but that’s how the game rolls.

Rennen never expects to fall for Ariana, and it throws him for a loop when he realizes she’s Ace’s sister. But Rennen’s not going to let a simple complication like that come between him and the woman of his dreams. He understands Ariana’s reservations—heck, even admires her loyalty to her brother. But Rennen’s used to waging uphill battles. Abandoned as a child, Rennen learned a long time ago that you have to fight tooth and nail for anything you want in this life. And he wants Ariana, heart, body, and soul!

Caught between loyalty and love, will Ariana choose her family or her heart?

Normally I prefer my post-apocalyptic fiction to have a lot more fighting. All I knew about this book going in is that it’s about a troupe of actors and musicians going from town to town twenty years after the world ended.

This is a literary book. Beautiful prose. Written in a sort of circle covering the events of forty years that finally closes at the end of the story. The main character—the person who ties all the others together—dies in the first chapter.

I wasn’t sure I’d like it at first, but in the end I really loved it. I did listen on audible, and the narrator was fantastic, which always helps.

Considering there isn’t much action, and for a post-apocalyptic book it’s basically perky, I really enjoyed this on.

Kirsten Raymonde will never forget the night Arthur Leander, the famous Hollywood actor, had a heart attack on stage during a production of King Lear. That was the night when a devastating flu pandemic arrived in the city, and within weeks, civilization as we know it came to an end.

Twenty years later, Kirsten moves between the settlements of the altered world with a small troupe of actors and musicians. They call themselves The Traveling Symphony, and they have dedicated themselves to keeping the remnants of art and humanity alive. But when they arrive in St. Deborah by the Water, they encounter a violent prophet who will threaten the tiny band’s existence. And as the story takes off, moving back and forth in time, and vividly depicting life before and after the pandemic, the strange twist of fate that connects them all will be revealed.